Sean Harribance: A Special Blog Entry for His 80th Birthday

The Psychical Research Foundation has had the opportunity to test the reported abilities of a number of psychics and mediums over the years, and one of the most notable of them - whose performance has stood out in a number of parapsychological studies - is Sean Lalsingh Harribance, who celebrates his 80th birthday today. To observe this special occasion, the PRF would like to take a moment to acknowledge and reflect upon Sean's valuable contributions as a participant in its research programs. Born on the West Indies island of Trinidad, Sean initially became widely known and recognized in the late 1960s for the psychic readings he would give to various individuals from the local populace. Even though he'd never previously met these individuals before, Sean was reportedly able to tell them a number of accurate details about themselves. This eventually brought Sean to the attention of Mausica College psychologist Hamlyn Dukhan, who carried out some preliminary tests with him [1]. Recognizing that Sean was used to applying his ability toward gathering personal details about the clients who came to him for a reading, Dukhan developed a simple procedure which adapted one aspect of Sean's "responding to people" to a test situation by concealing small portrait photographs of both male and female individuals (placed in random order) underneath a folded tablecloth. Sean would then be brought into the test room and, one at a time, would attempt to guess the gender (male or female) of each individual shown in the row of hidden portrait photos, with a 50% probability of him being correct in each instance. Sean achieved an accuracy rate of 59.4% in the test, which is associated with an odds ratio of more than 20,000 to one against chance (z = 4.11, p = .00004, two-tailed). In light of these promising results, Dukhan informed other parapsychologists about Sean, which led to him being invited to the United States for additional testing at research centers in North Carolina (including the PRF). In continuing this work, the PRF conducted a lengthy series of tests in the 1970s which took steps toward further refining Dukhan's procedure in ways that would help further guard against ordinary modes of sensory cuing. One of those steps - first implemented during Series 8 & 9 [2] - involved isolating Sean in a closed room separate from the one where the photo portraits located, so that they would be completely out of his line of view. In her role as the testing experimenter, PRF research associate Judith Klein arranged the photo portraits for each test trial in the adjacent room, shuffling the photos multiple times to thoroughly randomize their order before laying them out face-up in a row on a folded blanket (to minimize auditory cues). She then knocked once on the wall between the rooms (which, having a thickness of six inches, also helped muffle any extraneous noises) as a neutral starting signal for Sean to begin making his guesses. Sean then conveyed the same signal back after making his last guess, at which time Judith gathered up the portraits and repeated the process over again for the next test trial. As a means of further reducing sensory cues in Series 9, Judith kept the portraits face-down so that she would remain unaware of their gender order while Sean was making his guesses. The graph shown below in Figure 1 offers a visual summary of Sean's results in these two series of tests. As can be seen, out of the 1,000 individual guesses he made in each of the series, Sean achieved accuracy rates of 62.2% (Series 8) and 67.7% (Series 9): 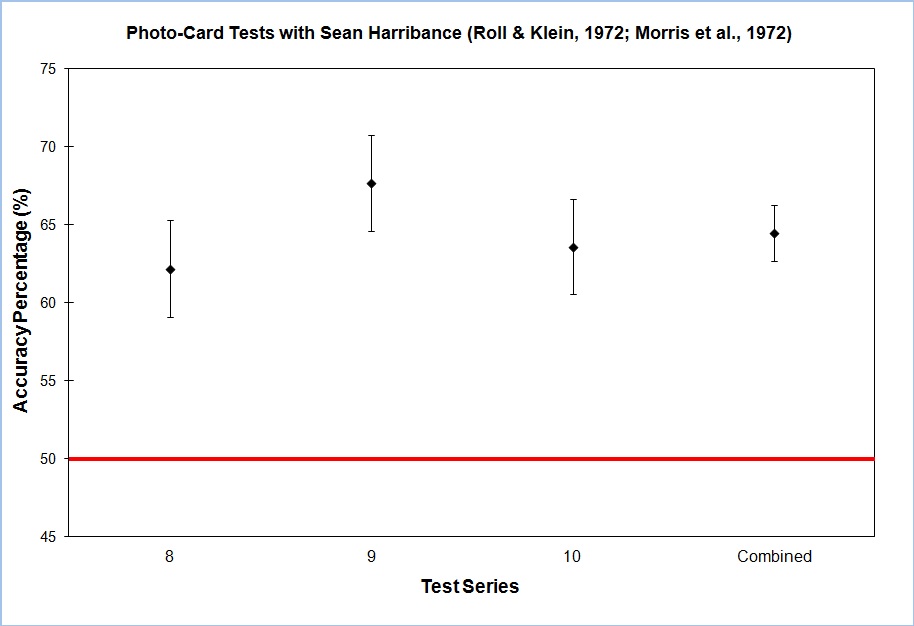 Figure 1. Graphical summary showing the accuracy percentages (with associated 95% confidence intervals) obtained by Sean in three series of photo portrait tests conducted by the PRF (Refs. 2 & 3). The red horizontal line at 50% indicates the average accuracy rate that one would expect to find by chance. The far right-hand percentage marked "Combined" represents Sean's accuracy combined across all three of the test series.

While these accuracy rates respectively amount to differences of only 12.2% and 17.7% from the expected chance value of 50%, they turn out to be extremely significant differences by statistical standards, with each being associated with an odds ratio of more than a million to one (z = 7.72 & 11.19, respectively; binomial p < .000001). One might wonder: Could Sean have achieved these notable results simply by sneaking out of the room he was in and looking into the adjacent one? This doesn't seem too reasonable of an explanation, considering the two possible hypothetical scenarios by which he might have attempted this:

1.) Looking into the adjacent room from the hallway - Considering the noise it made, Sean likely couldn't have opened the door and put his head through the opening without being heard or noticed by Judith. He also couldn't have simply peeked into the room through the door's keyhole because it was completely filled in. Moreover, even if he'd managed to look into the room by these means, Sean's view of the portraits would've been blocked by a large refrigerator standing between the door and the test area. He also wouldn't have been able to see the portraits in Series 9, since Judith placed them face-down, as mentioned. One must also keep in mind that Sean would've had to successfully pull such an act off (without ever being noticed) not just once - but multiple times - in order to achieve the results he did. 2.) Looking through the outer window of the adjacent room - Considering the rapid pace at which he regularly completed his sequence of guesses (only about 10 seconds total), it doesn't seem likely that Sean would've been capable of: slipping out of his room, running around the outer perimeter of the PRF building (a distance of roughly 26 feet), looking at the portraits through the window, running all the way back to his room again, and signaling Judith - all within this short of a timeframe. Again, one must keep in mind that it would've been necessary for Sean to have successfully done this multiple times, without ever being noticed. This entire process also would've done him no good in Series 9, since the portraits were face-down. Thus, it doesn't seem that Sean's results can be easily explained by resorting to simple cheating. If, on the basis of these results, one considers the possibility that Sean does genuinely possess some form of ESP ability, then they might be naturally led to wonder: How might his ability work? What is going on inside his brain when he engages his ability? As a preliminary means of exploring these questions, the PRF subsequently took steps in Series 10 to monitor Sean's brain wave activity using electroencephalography (EEG) while he was actively participating in the photo portrait test [3]. As seen in Figure 1 above, Sean again produced a significant accuracy rate of 63.6% during this this test series (z = 8.83, binomial p < .000001), and as shown along the left side of Figure 2 below, an intriguing pattern appeared on his EEG: During test trials in which he scored above chance, alpha wave activity (often associated with a state of passive relaxation) was present 24.8% of the time. But on trials in which scored near chance, alpha activity was present only 15.5% of the time - a statistically significant difference. A similar kind of difference was also consistently observed in another test series (right side of Figure 2), when Sean's EEG was again monitored while he was participating in a standard ESP card-guessing test.

Figure 2. Graphical summary of Sean’s EEG results during two series of ESP tests (Ref. 3), which indicate that his ESP ability tends to be correlated with a relative abundance of alpha wave activity.

A further hint that Sean's active use of his ESP ability is correlated with a relative abundance of alpha activity was found nearly two decades later, when neuroscientist Cheryl Alexander monitored Sean's brain waves during ESP tasks using computer-based quantitative EEG [4]. Her results also indicated that an increased amount of alpha was concentrated around the occipital and parietal lobes, located towards the rear of his brain. These findings collectively suggest that Sean's ability is correlated with at least one known aspect of brain functioning, which points toward the likelihood that the processes underlying his ability may not be outside of conventional neuroscience (in other words, they may not be "beyond the brain," as some staunch skeptics tend to assume). In the years since he's worked with the PRF, Sean has continued to give readings for private clients and lend support to the empirical study of psychic abilities through the Sean Harribance Institute for Parapsychology Research (SHIPR), a Texas-based non-profit organization he founded in 1995. The SHIPR website can be visited by clicking on this link. (There is also this link, which directs to a more graphically-formatted version of the site that has recently come online.) For more about Sean's early work with the PRF, one should take a look at the article written by PRF research associate Judith Klein in the archival Spring 1971 issue of Theta, the PRF's official bulletin/journal (a copy of this archival issue is available to view in Adobe PDF format by clicking here). Interested readers should also consult the fuller chapter describing the various parapsychological studies conducted with Sean over the years, which appears in the scholarly anthology Evidence for Psi: Thirteen Empirical Research Reports, edited by Damien Broderick and Ben Goertzel (Jefferson, NC: McFarland & Company, Inc., 2015). Happy birthday, Sean! ********* References: [1] Dukhan, H. (1969). Experiments with Lalsingh Harribance: Experiments in Trinidad. Proceedings of the Parapsychological Association No. 6 (pp. 65 - 66). Durham, NC: Parapsychological Association, Inc. [2] Roll, W. G., & Klein, J. (1972). Further forced-choice ESP experiments with Lalsingh Harribance. Journal of the American Society for Psychical Research, 66, 103 - 112. [3] Morris, R. L., Roll, W. G., Klein, J., & Wheeler, G. (1972). EEG patterns and ESP results in forced-choice experiments with Lalsingh Harribance. Journal of the American Society for Psychical Research, 66, 253 - 268. [4] Alexander, C. H. (2000). Neurophysiological research on an individual experiencing anomalous mental phenomena: A case study. International Journal of Psychophysiology, 35, 42 - 43.

The Spirits of '76: Looking into the Alleged Haunting of the General Wayne Inn